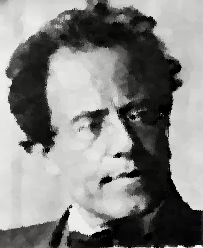 With “Titan” Mahler adopted the title of large-scale novel by Jean Paul. He tried to express the inner attachment to the ideas, which the poet uttered in his novel through the youth Albano: thoughts about love, friendship, death, eternity and particularly about the life of the nature.

The new thing about Mahler’s work is not external. The orchestration corresponds to the usual instrumentation for symphonic music at that time. But new is the latent orientation of the whole work towards the final movement and the method of tone-symbolic arrangement.